Combining improv, abstract electronics, chamber music, a dash of jazz and enough punk aesthetics to go around, the twelve tracks on this disc spend nearly an hour confusing, confounding, and in the end, uplifting you in ways that are almost unimaginable. It is the sound of four people pushing the boundaries of recorded music, having a grand old time in the process of making sounds that honestly have to be heard to be fully believed. A joyful celebration.
Dusted Magazine (US)

There is so much to love in this album. The Norwegian all-female quartet Spunk has delivered a solid second opus, showing a commanding growth in the group´s evolution. Spunk has created itself a signature sound that remains non-confining. It results in some of the freshest thought-provoking music this reviewer has heard in a while. Highly recommended.
All Music Guide (US) 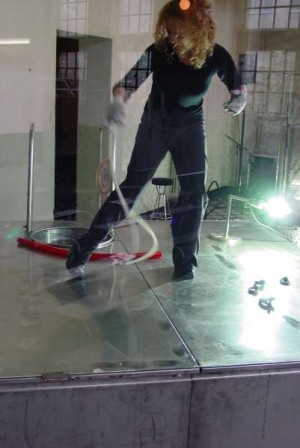 They are educated composers, but their unceremonius creativity kicks down all borders between pop, “art music” and noise. Here´s poplike fragments of humour and madness, parodies and weird singing, rhythms and things that can resemble “beauty”. Music for people who don´t know they have become adults. Fabulous!
Fredrikstad Blad (NO)

A big step forward since their debut from 1999. Now there´s a stronger sense of shape and direction in what they deliver. There´s a lot of tension in the music, much humour and dynamics. You are taken to a landscape you probably haven´t considered visiting.
Puls (NO)

Spunk´s art is open, playful and joyously varied and offer much of what we hope, feel and believe that music in 2002 can be.
Ballade (NO)

Pippi and Spunk have a lot in common, both are fearless, playful, supercharming and capable of moving boundaries.
Spot (NO)

Spunk have really shaped up this time, but it´s still difficult to say what they sound like. The mix of humour, electronics and hitting instruments is not far from what people like Keith Rowe, Derek Bailey or David Moss have done through the years. But this is not your typical European improv music. There´s a lot to learn from this for certain timeservers, like it´s actually possible to play melodies.
Mute (NO)

Occasionally over the top, but I´m never bored.
VG (NO)

An album that simply oozes attitude; an attitude toward sound and space, to the possibilities of an improvising quartet as determined by their fine appetite for absurdity.
The Wire (UK)

More accessible, more dynamic than their album of remixes, this is a delightful, highly challenging record.
Jazzwise (UK)

This could be the soundtrack to an obscure Maya Deren film from 40 years ago or as modern as the here and now – you just need to choose. At times there is a slow tide of movement over the spectrum of sound and at other times the chaos seems to be ever mounting. Spunk’s first album is now on my list to acquire, it is named Det Eneste Jeg Vet, er at det Ikke er en Støvsuger (The Only Thing I Know Is That It Isn’t a Vacuum Cleaner).
Gullbuy

Themilkfactory: Since they formed back in 1996, Norwegian all-female quartet Spunk have become one of the most respected improvising acts around, performing in theatres, art galleries, jazz clubs and techno clubs. Combining a wide range of influences, going from classical to jazz and electronica to country, Spunk’s music is utterly unique and challenging. Barely a couple of months after releasing Filtered Through Friends, a collection of remixes of tracks from the band’s first album, Norwegian imprint Rune Grammofon now releases Spunk’s most anticipated second opus. All four members of Spunk are involved in a variety of extremely diverse projects, but their work as part of this formation provides by far their most uncompromising contribution to music. Their approach to composition is at once colourful and lively. Their first album, Det Eneste Jeg Vet Er At Det Ikke Er En Støvsuger, translating roughly by The Only Thing I Know Is That It Isn’t A Vacuum Cleaner, released in 1999, was taking integration between musical instruments and voices to new heights, creating intense and inspired moments of absolute minimalist lunacy. With this second album, Spunk continue to explore the possibilities of improvised music. Den Øverste Toppen På En Blåmalt Flaggstang (The Very Top Of A Blue-Painted Flagpole) is playful, atmospheric, organic and exciting. Resulting of stimulating work sessions, the twelve tracks once again show Spunk under extraordinarily creative lights. Very disconcerting for the non-initiated, the compositions, in turn smooth and contemplative or abrasive and assertive, challenge the mind on unfamiliar grounds to reveal their intense beauty and extreme emotional nature. Melodies are not obvious and straightforward, but Kristin Andersen (trumpet), Hild Sofie Tafjord (French horn), Maja Solveig Kjelstrup Ratkje (vocals, electronics) and Lene Grenager (cello), all classically trained, know how to optimise their substance to balance the lack of usual structure of the tracks. Spunk disconcert even more when they get on almost traditionalist grounds, as on Sing A-Long. Here, the quartet weaves a beautiful little jazz number more in line with the rest of their contemporaries. But it is when their music is at its most experimental that Spunk present their most challenging work. “Free collective improvising is”, as label founder Rune Kristoffersen puts it in the press release, “one of the most demanding ways of making music”. Spunk have, in their eight years working together, mastered the genre like no others, avoiding self-indulgence or over-abstraction. Instead, they have developed a common language allowing them to communicate and establish pure cohesive lines, producing in the process some of the most important improvised work of the last decade. 5/5

photo: from concert in artwork by Per-Inge Bjørlo

This entry was posted in Other album reviews and tagged SPUNK. Bookmark the permalink.