“Voice” is the title given to Maja Ratkje’s new solo-record – a release that’s set to establish her as one of Norway’s foremost crossover artists. Contemporary, avantgarde, electronica, noise and free improvisational vocal antics are just some of the wildly varied influences that make up her truly unique record. Says Maja to MIC’s Norwegian web-site Ballade.no: If there’s ten seconds of innovation on a one-hour record, it’s worth it all – you’ve then got a kick you want to share with others. 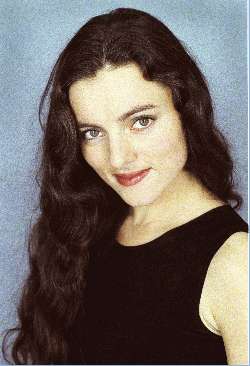 Maja Ratkje has managed to complete an impressive array of accomplishments – and she’s not even 30 yet! Her compositions have been performed in more than 40 countries on five continents. Last year saw Ratkje being awarded the then newly inaugurated Arne Nordheim’s Prize. Within the same year she also secured the second place at “The 23rd International Competition of Electroacoustic Music Russolo 2001” for her comosition “Sinus Seduction (moods two”). Pieces such as “Louange”, “Waves I” and “Waves IIb” have awarded her distinctions such as EBUs Rostrum-award. As early as in 1997, Ratkje received commission for a work that was premiered at the third Gaudeamus International Young Composer’s Meeting in Holland. Such acclaimed performers and orchestras as Arve Tellefsen, Cikada, The Vertavo String Quartet and Oslo Sinfonietta have performed her works. She also been active as an organisational figure: 1995 to 1999 saw her being the head of Young Nordic Music and since 2001 she has been a substitute member of the Norwegian Council for Cultural Affairs. Today she also acts as a representative to Oslo contemporary music festival Ultima’s programme committee.

Her audience is growing, and for many of them she’s best known for her releases, contributions to other artist’s records and her energetic live performances. Ratkje has released records and performed with Spunk, Fe-Mail, Jazzkammer and POING. In addition to these she has collaborated with well known Dutch vocal master Jaap Blonk, Evan Parker, Masami Akita, Otomi Yoshihide, Paal Nilssen Love, No Spaghetti Edition, Oslo Sinfonietta, Kari Svendsen, Folk & Røvere, (x,y,z), Salvatore, Jaga Jazzist, Tom Lund and Lasse Marhaug.

Says Ratkje of her co-operation with the laptop duo: “Initially, we met in Bergen to record the raw material. All of the tracks are based on my voice being reproduced through various recording techniques. We then started to swap tapes, and gradually the various lines we had followed began to intertwine, eventually ending up in a total chaos. In the end it was hard to tell who had actually produced whom. I’m the boss anyway!”

Voice displays a cacophony of voices, altered sound-bits and twisted ambience – lyrical passages are contrasted by tidal waves of noise. Titles such as “Vacuum”, “Insomnia” and “Dictaphone Jam” speak for themselves.

“Jon Øivind Flink has written some of the texts on Voice, whereas others are pure nonsense babbling”, says Maja. “I’m fascinated by transcendence of borders – language transforming into sound and meaningful and meaningless being equalised. In terms of form and context, Voice is way out there – even I hope it all makes sense. In that sense, this solo-album is by far the most risky kamikaze-project I have ever undertaken. The music is darker, scarier and more introvert than anything I’ve done in the past with for example Spunk. Voice is my own ego-trip, and at times it is an apocalyptic one.”

Ratkje maintains an impressively active schedule. Recently she performed one of her works during Gaudeamus in Apeldoon in Holland. She made the most out of her trip playing no less than three separate concerts together with Fe-Mail colleague Hild Sofie Tafjord. At the same time she managed to find time to do a studio session with Dutch vocal master Jaap Blonk.

Says Ratkje of Blonk’s influence on her work: “In Amsterdam, somebody gave me the most encouraging compliment: “Out of nowhere you have emerged to perform stuff that’s as good as Jaap’s – it’s just an octave higher!” I’ve got nothing but respect and admiration for Jaap Blonk. He’s a surrealist, a dadaist and an audio-poet. He’s not a clown though – he’s definitely got an edge. We’ll be releasing a completely acoustic duo record in the future, and it’ll be far from gloomy and melancholic!”

Last year saw Ratkje co-arranging the Open Ears festival in Oslo together with one of Norway’s most respected young jazz drummers Paal Nilssen Love. She holds a strong enthusiasm for improvised music:

– Improvised music can always be adapted to a given situation. When Spunk play school concerts arranged by the Norwegian Concert Institute, improvisation is a great tool for communicating with the kids. The children come up with key words that we play with, or we might make weird sounds on strange instruments and improvise shadow theatre. You can always feel the vibe from the audience when you improvise. If something’s not working out you just have to clench your teeth and play on. It can be so frustrating, but then again you desperately want to create something out of it all. I’ve never left the stage in frustration – I don’t give up that easily!

Dutch vocal icon Jaap Blonk and improvised music have been cited as some of Maja Ratkje’s inspirational sources. Japanese music is another:

– Long before I started to listen to any Japanese stuff, somebody commented that my music sounded 70% Japanese. Today I appreciate the sonorous, aesthetic and complex qualities of Japanese music. Eastern music is different from Western in that it is often characterised by expectant pauses which brings time to a standstill. I find that Eastern music is more non-linear and static than Western compositions – resulting in more focus on energy and sonorous qualities.

Ratkje’s energy and enthusiasm goes beyond her role as a composer and performer. She’s been labelled a composer with “political potential” and, as mentioned, she’s a member of Spunk which describe themselves as an “audio-anarchic ensemble”.

– I have a strong need express myself. My message is idealistic in the sense that I don’t want to be a part of the established society. Before music became my main obsession, I was an avid environmentalist and held leading positions in various organisations. I believe in non-commercial and experimental music being a political statement in itself: one chooses to omit the prevailing, the conformist and the commercial aspects of your artistic expression. You simply can’t speculate in the audience’s anticipation and reception, you’ll never manage that. At the same time I always compose my works based on the notion that I want the pieces to be heard by an audience. It’s vital for me that Voice reaches its listeners – especially given all the other stuff that’s being released these days. If there’s ten seconds of innovation on a one-hour record, it’s worth it all – you’ve then got a kick you want to share with others.

Maja Ratkje is not preoccupied with prevailing lines of demarcation between classical and contemporary music. Still she believes in music’s ability to change the world:

– I feel that our society to a large extent is superficial. Art can represent a means of reaching new meaning and purpose. A Chinese proverb says. “If you own more than five things, you own too much.” I’m profoundly sceptical of society’s glorification of consumption – it’s an expression of utter contempt for the rest of the world. I hope there’s some adolescent stubbornness left in me that’s expressed in my music. In earlier stages of my life I was more focussed on extremism and contrasts. Today I’m in more of a state of development where I search for meaning. My artistic expressions are based on my own aesthetic choices, choices that I continuously seek to reconsider and re-evaluate.

As for the future: “I’ll continue my vocal focus. Apart from that I hope I’ll be open to changes and developments. One should always strive for continuous forward motion.”

This entry was posted in Interviews in English, on Maja in English. Bookmark the permalink.