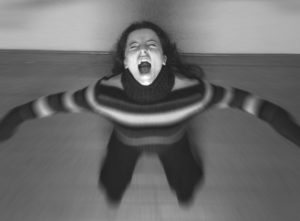 First published in Norwegian in Parergon 1999.

With cyberspeed we stumble around in the universe of today, only to find that to a high degree it is constructed for individuals. Everything is so strangely made to fit that we tend to forget what we wanted to say in the first place. I read somewhere that the existence of a cultural elite, as a watch-dog for the “intellectuals”, is now but historic. Since my view of things cannot be shared with that of old men writing articles about their reminiscences, I find this less disconcerning than the over-ambitious emphasis that is being put on the individual. One result of making all values subjective is that nobody dares to put the finger on anything, without first excusing his or her own taste. In this way, the cultural life looses its strength of character, and the market forces can set the rules of the game, when it comes to fulfilling the demands of the consumers.

Even worse is the fact that the artistic expression is being reduced to something more or less efficient on the basis of what the individual (who is preferably famous) feels about it, and the persona of the creator of an artwork is focused in such a way that a shadow is cast on the Work itself (which, ideally, should be capable of standing on its own, if good enough).

Nowadays, a composer’s value is judged on his or her (preferably national) accomplishment and social status. Of course, this is not necessarily bad, when it helps putting butter on the toast – or gives opportunities for better performances as well as other things. But why give up at this point, when it is clear that the public’s interest of the core, the music itself, does not necessarily increase?

Braveness is paramount when it comes to upholding the music as the prime force for artistic creation. Why do I voluntarily wish to express myself in a such a way that I effectively exclude myself from the liberal-market-community? (And I still demand a right for my expression to exist!) To make legitimate one’s work in the face of others and one self included is a mechanism of survival. This is the answer to the recurrent question: Is what I am doing efficient?

Creating music is fundamental, archetypal. I mean that music, too, can be defined as something archetypal. Music is one of our most forceful means of communication. The governing rules for this belief are the following:

Music has to be strong. It deals with communication in an extremely direct fashion, within its own language. This is something that makes it vulnerable and subtle, but also, potentially, a bearer of great poetic power. The pure musical experience in the collaboration between performer and listener can only be achieved through non-secondary music. A secondary expression in visual or text-programmatic form might be able to enforce and deepen parts of the music, but will not make it stronger.

Music has to be in rhythm with the times. Composers and performers have a duty to keep themselves up-to-date in every way possible, and not just inside their own field of profession. This could mean other domains of artistic expression, or political or social interests. At least, one has to show an interest in other areas than one’s own, and equally, one has to have the ability to move further into at least one of them. The music is naturally coloured by the conglomerate of experiences, conscious and unconscious, that the composer/performer may have, but this should not lead to that the pure music is being submissed to one fascination after the other. In all cases, the point is that, in order to have anything to say, a composer or a performer will have to have lived and made experiences.

A composer has to know what it means to perform music. A performer, on his or her side, has to have a truthful and conscious attitude to music-making, a natural relationship to the instrument, and the sound should be the result of a conscious choice. Furthermore, the composer has to understand that the most important thing is the creating of music. Expressing opinions, explaining and arguing must be secondary.

Truthfulness is the last rule. Honesty is an important word, because one really has to be serious about one’s actions. One also has to feel good about what one is doing, even if one cannot always be in control. If the music is meant to “live its own life”, one has still to be able to identify with it.

Translation from the Norwegian original by PerM Lindborg
This entry was posted in by Maja in English. Bookmark the permalink.