21 Marches for the 21st Century 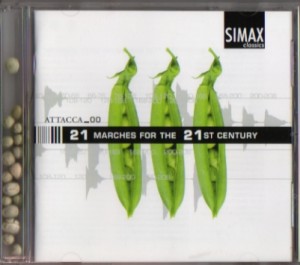 The Norwegian Council for Cultural Affairs invited 21 composers from Norway and abroad to each compose a march for marching band – hence 21 Marches for the 21st Century. Marches are very much a living tradition among many bands in Norway and abroad, but the repertoire is often rather retrospective in character. The Council for cultural affairs hopes that these 21 new marches will tempt amateur and professional bands alike to use a new repertoire both in their many concerts and when the bands are out marching. Who is to say that the march does not have a future as a musical genre? The project is a joint venture between the seven professional military bands of the Norwegian Armed Forces, the record company Simax and Norsk Noteservice A.

This entry was posted in Compilations, Recorded compositions. Bookmark the permalink.