On the records River Mouth Echoes (best version) and Giants of Jazz.

“essential extensions” for accordion, double bass and alto saxophone is a rewriting of the piece “Louange”, a commission from the St. Olav Festival in Trondheim with Arve Tellefsen on violin in addition to ‘cello and church organ. The musical ideas are the same. The fifth movement of Olivier Messiaen’s “Quatour pour la fin du temps” is a point of departure for a new piece written 50 years later, hopefully with a new topicality. Instead of reflecting the atmosphere of Messiaen’s movement, which was one of the tasks in writing “Louange”, “essential extensions” has a totally different expression. This music is extrovert and physical, and it explores the (almost free jazz related) sound the three instruments make together. It was written for the excellent Norwegian trio POING, which is Frode Haltli on accordion, Rolf-Erik Nystrøm on saxophone and Håkon Thelin on double bass, as a gift and a surprise, being their first score to play.

MIC 29.11.02: “Maja Ratkje’s composition Essential Extensions kicked off the carnival. One can trace much of her aesthetics to her unique approach to the human voice it’s as if singing is her manifest. Norwegian composer Arne Nordheim once stated; Everything must sing! The influence might be indirect in Ratkje’s work, but one can sense the syllables and diphthongs as well as vocal outbursts that don’t interrupt the setting. (…)” Nicholas H. Møllerhaug

The Permofrming Arts Journal 30.05 03: “(…)’Essential Extensions’ had to do with free jazz. The performers’ “improvisations” suggested that the composer was more interested in the subtlety of colors and ensemble effects than the fireworks of clashing individualities. I therefore assume that Ratkje probably tried to extend the Poing’s general musical preference of grasping sonic textures as their entirety. As the sounds were gradually layered, the increase of sonic density and concentration were heard in the piece. (…)” Written originally in Japanese by Keisuke Mitsuhashi and translated into English by Hiroyuki Itoh

La Folia, Online Music Review: “Huddersfield Festival 2004: (…)The piece performed is by countrywoman Maja Ratkje (b. 1973), one of the brighter lights in Norway’s thriving generation of composers born in the ’60s and ’70s. Her work is eclectic and unpredictable, and for these reasons Essential Extensions, which Poing describes in a BBC interview as a piece they memorized due to its many performances, was a surprise. Even after several hearings, I am not sure what to say about it. It is static and deliberate, at times maddening in its calm, and at other moments, transfixing. Despite its relatively eventless evolution, I found its approach both conventional and occasionally daring. Volans cloys; Ratkje is more modest.(…)” Dan Albertson 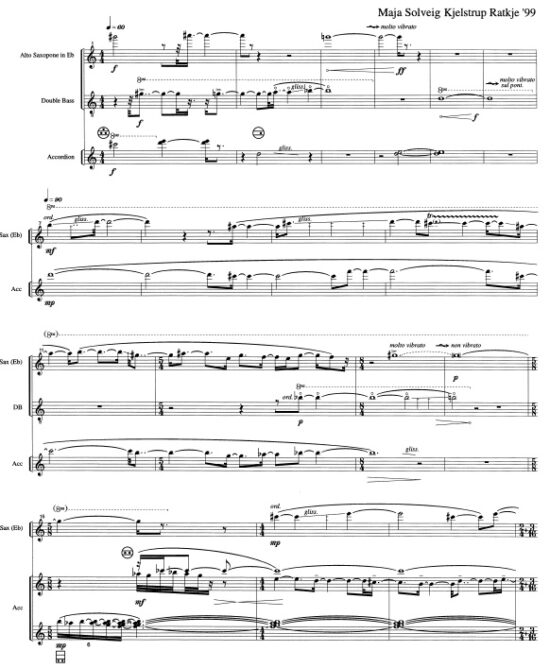 This entry was posted in Chamber music and tagged accordion, double bass, sax, with POING. Bookmark the permalink.