Written in four main sections. may be performed as a recital piece or as theatre music. Voice part, in particular the piece “Joy”, can be done as a solo piece.

“Music for Ibsen’s «Ghosts»” is a commission from the Northlands Festival in Scotland, written for flute and female voice. It was first performed at a recital concert in Ackergill Tower. The performers were the composer herself and flutist Rebecca Larsen. The music was included in the play during a tour with a London-based theatre company and director John Doyle which started with two performances at the Northlands Festival and continued through the north of Scotland in the period 16.-25.09.99. “Music for Ibsen’s «Ghosts»”, which is written in four main sections, may be performed as a recital piece or as theatre music. This is specified in the score. 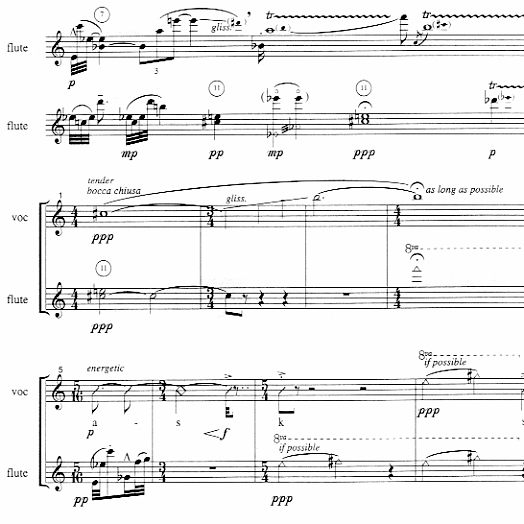 The Inverness Courier, Friday, October 1,1999: “(…)As Grieg’s music had been an integral part of Ibsen’s “Peer Gynt”, so Maja Solveig Kjelstrup Ratkje was commissioned to provide a score for this Northlands Festival production. Written for wordless voice and flute, and performed “live” between each act by the composer and flautist Rebecca Larsen, the powerful and eerie sounds heightened the atmosphere and intensity of the drama.(…)” JL

Listen to Norway, Musical review no.1, 2000, vol.8: “(…)Ratkje’s score is for her own voice and for Rebecca Larson’s solo flute: both women appear visibly on stage, rather as if they were familiar spirits. Their finely-threaded, wordless “mouth” music and instrumental vocalise intertwined in spine-chilling preludes and interludes. At the start, a single flute note and its echoing, tremulous harmonic, became a fog-horn of pain to which the human voice answered in a microtonal dying fall. The five-minute introductory “aria” seemed like the cry of all Ibsen’s suffering women -of humanity itself. As the orphanage is set on fire, Ratkje’s interlude is lit by vicious, percussive flute playing and glottal, teeth-ticking trills in the voice. (…)The human voice, strained and stretched to its expressive extremes, was very much a characteristic of this year’s Festival, with its theme of “landscape and legend, songs from the earth’s soul, and stories from wild places(…)” Hilary Finch